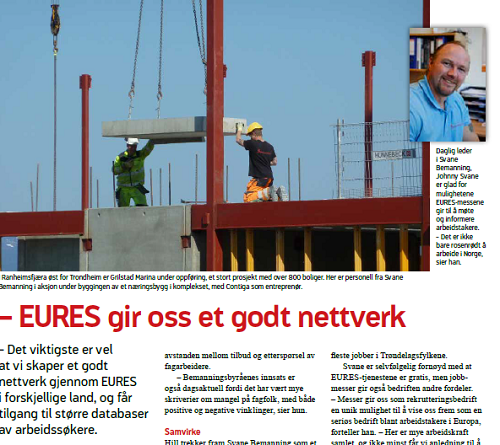 – The most important thing is that we create a good network through EURES in different countries, and get access to larger databases of jobseekers. This is how the general manager of Svane Bemanning, Johnny Svane, answers when we ask what the collaboration with NAV EURES Nord-Trøndelag has given of results for the company he founded in 2008, and which already has around 110 employees on average throughout the year and a turnover of NOK 60 million. in 2012.

– But we do not devour all the CVs offered through EURES. We must assess the quality of the jobseekers ourselves. It is not always their “experience” that matches reality, says Svane.

Svane Bemanning specializes in skilled workers for Industry, construction & civil engineering, which has proven to be a viable niche.

– There has been a lot of focus on the lack of engineers and health workers, says NAV EURES advisor Melanie Hill in Nord-Trøndelag. But now it is high season in construction. NAV`s business survey from the spring of 2013, shows that Trøndelag counties have a tight labor market within this sector, and on a national basis the largest relative distance between supply and demand of skilled workers.

– The staffing agencies’ efforts are also topical because there has been a lot of writing about the lack of professionals, with both positive and negative angles, she says.

Hill cites Svane Bemanning as an excellent example of collaboration and how employers can use the full range of the EURES offer; advertising in databases, CV searches and job fairs, and how to reach many nationalities in this way.

– Together with Svane Bemanning, for example, we have prepared some standard texts, and we can have ads across large parts of Europe in a few hours, says Hill and adds that Svane Bemanning arranges housing, travel and contractual wage terms in an exemplary manner.

– The way they facilitate makes it easier to recruit the good and right people. They get things done, create a good working environment, and show that it is possible to have a functioning international and multi-ethnic business, she says. In 2013 alone, Svane Bemanning participated in four job fairs in Europe, and 90 per cent of the employees are from Poland, Estonia, Lithuania, Ireland, Denmark and Sweden. Most work in Trøndelag counties. Svane is of course happy that the EURES services are free, but job fairs also give the company other benefits.

– Fairs give us as a recruitment company a unique opportunity to show ourselves as a serious company among employees in Europe, he says.

– A lot of labor is gathered here, and not least we get the opportunity to tell them what it is like to work in Norway.

– Maybe it’s not as rosy as they think? – No, it is not a dance on roses to work in Norway. Many people think it’s gold. But it can also be lonely and hard. At home, they have a low hourly rate, and delay the hour. Here, more of each hour is required. In Norway we pay well, then they have to work well. The worst thing is to miss family, boyfriend, children. It takes a lot to live alone, and can be difficult mentally. We spend time telling this when we are out, and then there is a greater chance of getting people who have thought through the problem before they come here.

– This will help to filter out the junk. There are scammers in Norway as well. It is a pity that we serious people get stung for those who are not serious. They should be removed from the market, because no one benefits from social dumping, he concludes. 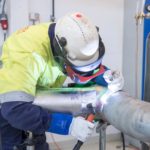 At Svane Bemanning, we spend a lot of...

We started 2018 better than expected and from...

This website uses cookies to improve your experience while you navigate through the website. Out of these, the cookies that are categorized as necessary are stored on your browser as they are essential for the working of basic functionalities of the website. We also use third-party cookies that help us analyze and understand how you use this website. These cookies will be stored in your browser only with your consent. You also have the option to opt-out of these cookies. But opting out of some of these cookies may affect your browsing experience.
SAVE & ACCEPT